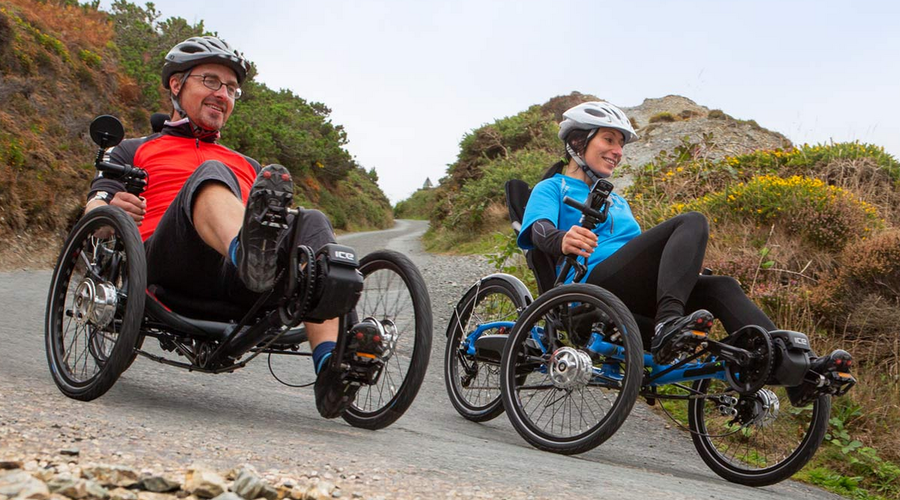 Many of us have difficulty starting a new, healthy habit. We've all been there. We start with the best intentions but due to human nature we miss one or two times and before you know it a week or so has passed. Surely, there is an easier way to start living healthier that isn't boring, stressful or uncomfortable!

Cycling is a great way to get healthier that is low-aerobic: in plainer words, cycling won't leave you out of breath because you can define the pace. Start to fill a little winded, slow down the pedalling and catch your breath.

If you're just starting out and riding with a group of friends, their natural pedalling speed will probably be faster than yours. So, it is common for new riders and seasons ones to play a game of start and stop while you build up your stamina. Is there a better way? Absolutely! When you add an electric motor to a recumbent trike, the electric motor allow you to go faster and further than your fastest of riding buddies. With an electric trike, you still get the benefits of cycling but are in control of the assistance the electric motor provides. As long as you are pedaling forward, you are improving your health and longevity.

Do you enjoy fighting a cold? Didn't think so! A strong immune system is our body's last resort to fight off the bacteria and viruses that make us sick.  Have you ever noticed that people who regularly exercise seem to be less sick than other people? It is no coincidence. Research has shown that folks only need to moderate exercise (e.g., riding a bike for an hour three times a week for 20 minutes each) to significantly improve their immune system.

Lower your Risk of Type 2 Diabetes

In the United States, more than 30 million adults have diabetes, according to the Centers for Disease Control and Prevention (CDC). Some 90-to-95 percent of those cases take the form of type-2 diabetes.

If you move, you burn more calories than sitting still. Riding an electric trike is easy because no matter how little effort you feel like doing, the electric motor can compensate and you will be getting some exercise rather than none. When you get moving again, the pounds start to fall off.  The less you weigh, the better your body will feel and perform.

In fact, “If you do just two to three vigorous bouts of exercise per week for 45 minutes, you could lose a pound of fat every two weeks from the combination of calories expended during exercise plus what you burn afterward,” according to Dr. David Nieman, a professor of exercise science at Appalachian State University who was quoted in PopSugar, an online pop culture magazine.

“People who exercise regularly will tell you they feel better. Some will say it’s because chemicals called neurotransmitters, which are produced in the brain, are stimulated during exercise. Since it’s believed that neurotransmitters mediate people’s moods and emotions, they can make you feel better and less stressed,” according to the American Council on Exercise.

Great scientists like Thomas Edison and others always took a walk when their were stumped.  A brief walk will clear one's mind as the change of scenery and elevated heart beat improves oxygen to the brain. Riding an electric trike lets your go further and faster than walking can. A person walks about 3 miles an hour but an electric trike can go upwards of 20 mph.

“Riding an electric bike just a few times a week may improve brain function in adults 50-years-old and older, potentially reducing the risk of contracting Alzheimer’s disease, vascular dementia, and other age-associated neurodegenerative disorders, according to a new report from the U.K.-based cycleBOOM project.”

“Released in February 2019, the cycleBOOM study, ‘The Effect of Cycling on Cognitive Function and Well-being in Older Adults,’ shows that to be beneficial outdoor exercise doesn’t necessarily have to be strenuous. A 60-year-old doesn’t have to do high-impact running to improve her brain health. In fact, riding an electric bike for recreation or basic transportation will improve brain function.”

Nothing is more important than getting quality sleep of 7 to 8 hours uninterrupted per night for your body to repair itself. Regular exercise, including riding an electric trike, may also contribute to better sleep and fight insomnia. For example, a long term study found that getting regular exercise helped folks to fall asleep more quickly than sedentary subjects. People who exercised were also less likely to wake up during the night than were people who did not exercise.

Similarly, a University of Georgia study found that when adults exercised less they complained about sleep problems more.